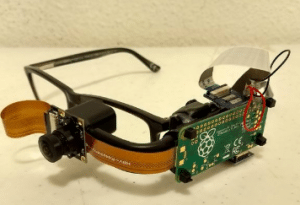 Yishai Silver is a recently graduated high school student from San Diego, Ca. He caught our attention with his Instructables Blog post, which went viral among the maker community. Yishai created a vision aid device by pairing Vufine with a Raspberry Pi computer. We were amazed by the creativity of his project so we reached out to him to hear the full story.

Yishai shared that this project was inspired by his wish to help out his grandmother who suffers from macular degeneration. He first started piecing the project together after seeing a contestant on America’s Got Talent who was blind and used Google Glass to help him see and interact with the world. Yishai was determined to recreate this experience for his grandmother. When he came across Vufine, everything clicked.

After some trial and error, Yishai was able to successfully create a DIY vision aid glass. His detailed tutorial on Instructables has been viewed over 40,000 times and received first place in the Raspberry Pi Contest of 2017. Yishai was very excited by this because he was a longtime Instructables user before this t was a huge honor to be recognized and celebrated by this community. More notably, his grandmother was extremely moved by his compassion and creativity. Yishai says when he first presented his grandmother with this device, she was incredibly emotional and proud of him.

Yishai continues to work on improving the vision aid glass. His next steps involve adding a verbal recognition component to the device. He also has several other projects he is working on. Yishai shared with us that people used to call him crazy when he was working on all his projects. He is glad he ignored them. His advice to us and the other makers in the world was ‘Don’t let people get you down, just keep working.’

To see Yishai’s full tutorial, click the link below:
http://www.instructables.com/id/Poor-Mans-Google-GlassAid-for-Those-With-Tunnel-Vi/