Last weekend, we exhibited at the first ever Worlds Fair Nano. This fun-filled, technology festival was described as ‘Disney World, TED, and Burning Man [having] an equal parts love child.’ The festival was located in Pier 70, right along the San Francisco Bay.

This definitely was one of the most fun events we’ve been to! The DJ booth was located in the futuristic ICARUS project and there was always someone on the dance floor. Also, all attendees got to take their turn riding around the show on adorable motorized stuffed animals.

In the technology playground, attendees were able to see demos of futuristic technology including VR ping pong and the Fireside Audiobox. At one point, the event crowd all gathered in the dome behind our booth for a silent disco.

We had a great time showing off Vufine+ to the WFN attendees. People were amazed by the high resolution of Vufine+’s screen. We look forward to having a booth at the show next year! 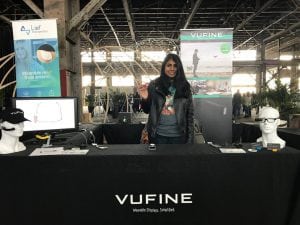